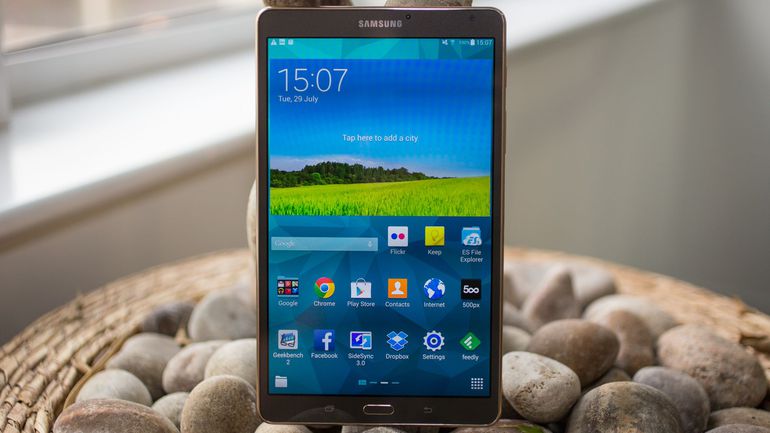 Samsung Galaxy Tab supports also the microSD, Swype input system, Wi-Fi b/g/n feature, GPS, and Bluetooth 3.0. The cameras are 3.2 MP rear-facing camera and 1.3 MP front-facing camera which can be used for video calls. Users allow to access the Android Market and Samsung Apps Store when need to add the new needed applications. The weight is .84 pounds which is almost a half of the iPad weight. Samsung Galaxy Tab has voice call capability (unfortunately this capability is disable for US region) as well as the video conferencing feature. Samsung Galaxy Tab also supports multitasking and flash supported web-browsing.

Beside the screen, Samsung Galaxy Tab is fully covered by plastic material which makes the weight is light enough if compare with Apple iPad. The color is white (for the black cover) and black (for front part). The looks is modern with the rounded edges. Samsung Galaxy Tab’s dimensions are 7.48×4.74x.47 inches which perfect for one hand. If compare with other Tablet PCs (which usually need both hands), Samsung Galaxy Tab seems more like a smart cell phone. To call, users can use the headphones (which is delivered with Samsung Galaxy Tab), a standard 3.5 mm audio connection, or Bluetooth headset.

At underneath the screen, there are four capacitive keys which are the menu, the home key, the back key, and the search engine button. At the right side, there is power button, microSD slot, SIM card slots, volume control keys. The body speakers, power cord jack, and accessory slot can be found at the bottom side. At the left side, there is a microphone. Users can integrate the Samsung Galaxy Tab with other official accessories such as the car kit, speakers, physical keyboard, and many others. The WSVGA screen offers the sharp imaging by delivering the 192-pixel density per inch. However, the imaging quality is not as better as the Samsung’s SuperAMOLED or Apple iPad screen.

It is natural since Samsung Galaxy Tab “only” use the TFT screen technology but the imaging quality is still good enough (at above average if I can say). The display is still good enough even though at below of the sunlight. The viewing angle is limited because of the TFT screen – also that the display quality is lower for view off-center. However it seems not a big problem since Samsung Galaxy is used with one hand so the point of view will be at center usually. The (horizontal and vertical) screen keyboard display is perfect and “real” so users can comfortably type the long messages.

The device specifications that I mentioned before, offers good multimedia performance. Unfortunately users will experience the glitch when open the flash-heavy sites. You may think it is because of the Flash player problem but since the flash-heavy sites can run smoothly on the smart cell phone with same specifications, the problem must be at the tablet system itself. The 16 GB memory internal capacity is very enough – and if not, the capacity can be upgraded by using microSD cards. It seems that Android Froyo OS perfectly intact into Samsung Galaxy Tab which means the serious challenge for the competitors such as iPad.

Samsung TouchWiz UI allows comfortable usage for users as well as access to Samsung Apps Store (which can access by using the data network). Users can easily slide (from left to right) the five to nine home screen desktops. Another interesting application that available is Galaxy Tab eBook which has similar function with iPad’s eReading application. Galaxy Tab eBook allows users to see the book covers of the eBook as well as the turning book animations if available. Beside this Galaxy Tab eBook, users can find the other usual Android OS application. The Samsung Galaxy Tab supports almost all the mobile and wireless network connectivity such as WiFi, 3G, etc.

The Email synchronization is smooth for both client or server type. The Samsung Galaxy Tab battery capacity is very good. It supports up-to five hours for full load of usage and up-to three days for general usages. Unfortunately it is needed the service company to change the battery since it can not access manually.